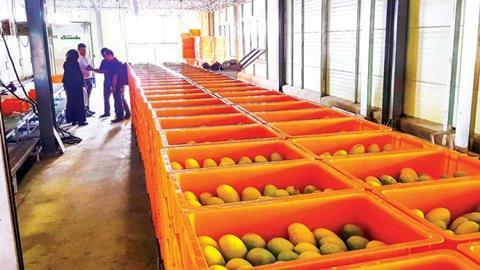 Leading South Korean importer and exporter, Hyundai Agro, has announced the first commercial shipment of Cambodian grown mangoes will be sent from the South East Asian country this week.

In an interview with Cambodian newspaper Khmer Times, managing director of Hyundai Agro, Chang-Hoon Lee, outlined what would be sent.

“We will send between 5 to 20 tonnes of both yellow and green mangoes every day, beginning from 15 January,” said Lee.

Destined for Korean supermarkets, the mango variety set to be exported is the Keo Romeat, a long, thin fruit with a balanced sweetness and smooth texture.

While that plantation matures, the company will source a further 3,800 tonnes from 23 other growers located in Kampong Speu and Kapot provinces.

Lee said it was important to source other local fruit to be able to ensure supply.

“We will send mangoes to Korea from our own farm and through contracted farming, because we have to send volumes every day, so we need many farms to boost our supply,” he noted.

The fruit will be managed at the company’s three-hectare processing facility in Kampong Speu’s Phnom Srouch district.

Some fruit will travel via airfreight, but much of it will be shipped, a method that Lee said would take six days.

“We have a lot of experience and technical know-how to send produce by ship. It would take six days to reach the destination and we can maintain the fruit’s freshness,” Lee said in October 2019.

Cambodia’s Ministry of Agriculture, Forestry and Fisheries (MAFF) has stated that the potential for mangoes to reach more markets on a large scale is present, but reliant on investment to build sterilisation facilities and process factories.

Ngin Chhay, director-general of the general directorate of agriculture at MAFF, told Khmer Timesmangoes could become one of the country’s main agricultural products for export.

“The government is working to explore China as a potential market,” said Chhay.

“Many Chinese companies from Hunan and Hainan provinces intend to invest in building sterilisation factories in Cambodia for the export of mangoes to China.

“We hope private investment companies will build the sterilising factories, with a capacity of about 1,000 tonnes to 2,000 tonnes per day for export,” he added.

Chhay said Chinese experts will visit and conduct inspections of mango farms in Cambodia before approving the export of Cambodian mangoes to China.