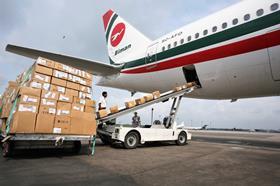 Biman Bangladesh has made the first step towards restating its airfreight service to Europe for fresh produce after a three-year absence.

Bangladesh’s national flag carrier had stopped transporting fruit and vegetables to Europe in 2016 after a ban on products transported directly from Bangladesh.

While the ban was lifted in 2018, the airline had yet to resume transporting perishables.

According to a report from The Loadstar, this is set to change as Biman Bangladesh has submitted a work plan to Bangladesh’s civil aviation ministry on carrying vegetables and fruits to Europe.

The airline said improvements made in phytosanitary certification, fresh produce processing and the cold storage will help it now comply with EU standards.

Mohammad Monsur, general secretary of the exporter’s association, toldThe Loadstarhe had met with the airline, but progress was slow.He noted there was a large Bangladeshi population in the UK and Europe creating demand for Bangladeshi fresh produce.

“Presently there is no (problem) in meeting EU compliance, since export perishable goods go through a government-run process,” Monsur said.

“It will be highly beneficial if Biman starts carrying vegetables to Europe.”