Future of farming up for discussion at AFC 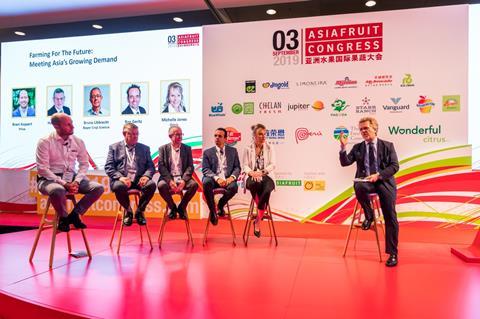 The 21st century will be the “century of cities”, according to Bram Koppert, Priva's general manager for Asia.

Delivering the keynote presentation during this morning’s opening session at Asiafruit Congress, Koppert made the revelation that 3m people move to cities around the world every week.

Koppert said this increasing urbanisation presents a need to develop production systems that match the food requirements of global cities.

In this regard, Koppert said considerable investments are being made in developing and improving greenhouse technology and urban farming facilities.

“Technological breakthroughs will turn the world upside down within the next 10 years,” Koppert explained. “There is a focus on innovation for growers, which in turn will create new business models.”

Koppert said the push to develop new farming practices comes as producers realise the need to scale-up their operations in order to be profitable.

“If you take a farmer with 30 acres, one generation later their son will need 180 acres to have the same income as their father.”

Given this, Koppert said it will be large-scale producers who will see the biggest gains from technological breakthroughs in the immediate future.

“Small farmers won’t benefit as much from new technology as big farmers, who have the scale to invest and produce in bigger quantities.”

A panellist in a group discussion that followed Koppert’s presentation, Costa CEO Harry Debney said the company has been using vertical farming methods at its mushroom farms for the better part of 20 years, while it is also pioneering the use of substrate farming for berries.

“More traditional, broad acre production methods don’t work as well in terms of where we want to go,” Debney told delegates. “The idea of produce growing in little rows in the countryside or in backyards is a romantic principal but it won’t feed the world.”

Joining Debney on the panel were Michelle Jones and Ron Geritz from Orisis, a company developing a 1,600m2 indoor farm close to Shanghai.

Geritz highlighted the productivity gains that will be delivered by the facility once it opens, claiming it will be able to harvest a crop of leafy greens every month, opposed to two times a year in an open field.

The benefits of controlled environment production don’t stop there, according to Geritz.

“Vertical farms allow you to tailor your production,” he said. “For example, you can alter the level of light, water or nutrients to make the product you're growing sweeter or bigger.