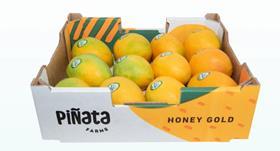 The leading Australian fruit producer began picking the specialty variety in the Northern Territory earlier this month, with new-season fruit set to arrive on Australian retail shelves next week.

Stephen Scurr, general manager tropicals at Piñata Farms, said mango volumes were light across all Australian growing regions due to warmer conditions than required during the winter flowering period.

“Most Australian mango varieties are affected this season,” Scurr said. “Honey Gold quality and size are as good as ever and consistent with what consumers have come to expect.However, volume is significantly down on last season, and previous average seasons.

“Within the Northern Territory, Darwin’s crop is similar to last season’s, Katherine’s is down a bit and Mataranka’s is up a bit on last year but down a bit overall.

“We just didn't get the consistent cool nights required for good flowering in any mango growing region – and neither did any other grower in northern Australia.”

The core Queensland harvest is expected to start later this month.Nearly 70 per cent of Honey Gold mangoes are grown in Queensland.

The variety is also produced in New South Wales, Victoria and Western Australia.