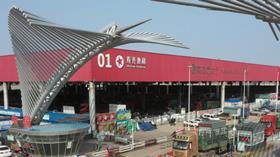 JD.com is set to invest HK$798m (US$102m) in agricultural wholesale market operator China Dili Group for a 5.37 per cent share in the company.

China Dili announced the agreement on 27 December 2020 and said the two companies would work to reduce the cost of China's fresh food supply chain and improve efficiency and effectiveness.

In its announcement, China Dili said the companies would build a modern fresh supply chain and circulation service platform to realise the digitisation of the entire fresh food supply chain.

The whole process would become traceable, guaranteeing food safety and solving long-standing problems such as the difficulty of farmers in selling agricultural products and low prices, while urban consumers are met with expensive products and a lack of food safety.

Both companies are set to bring different areas of expertise to the project, China Dili has established connections with producers and expertise in connecting them with offline businesses. Meanwhile, JD has a full range of fresh food marketing channels, a large customer base, logistics warehousing capabilities, as well as modern technology and digital capabilities.

In January 2019, China Dili revealed its strategy to become a “modern fresh food circulation service and supplier' through the use of technology and other upgrades. Then in October of the same year, it invested in retail chain Dili Fresh which currently has more than 400 stores in more than ten across China.