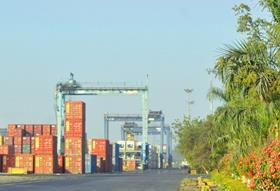 As ports around the world continue to work through the congestion caused by coronavirus (Covid-19), the lockdowns enforced by some countries are providing further hurdles.

In the Philippines, the Port of Manila’s container yard space is full and ships are being requested to divert. The country’s main island, where Manila is located, went into lockdown in mid-March and on 7 April the quarantine was extended until 30 April.

This has prevented companies from recovering their containers and has had a noticeable effect on reefer loading.

In an update released on 6 April Hapag-Lloyd said the reefer yard in Manila is congested with fully utilized plugs and suggested reefer imports to Manila divert to nearby ports for pickup.

To address the congestion, the Philippines’ Inter-Agency Task Force dedicated to the coronavirus has worked with authorities to create new policies to clear the port.

As part of the new policires,priority processing has been given to arriving cargoes, particularly food, medicine, medical and basic necessities. Containers must be withdrawn within ten days from discharge. Otherwise, they shall also be declared abandoned.

Furthermore, appropriate penalties shall be imposed by the Philippines Port Authority to ensure that consignees and importers withdraw the cargo within the window provided.

All refrigerated containers must be pulled out within seven days, except chilled cargoes, which are given five days. Unclaimed reefers are granted a three-day grace period, and after which are declared as abandoned goods.

India’s ports have also been facing disruption since the country entered a 21-day lockdown on 24 March.

According to a report from the Hindu Business Line, the Container Freight Stations Association of India (CFSAI) has said some of its member ports such as Jawaharlal Nehru Port Trust, Mundra, Pipavav and Hazira were evacuating containers from all the terminals to nearby container freight stations (CFS) in an attempt to reduce congestion. However, even the CFS are nearing capacity.

“With only a fraction of imports being gated-out by the trade, the container freight stations are facing an unprecedented challenge; we believe that in the next three to four days, most of them will reach their holding capacity and evacuation from terminals will come to a halt,” CFSAI said in a trade advisory on 2 April.