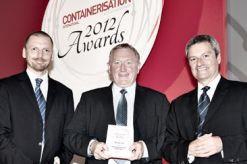 Brian Godsafe picking up the award

Maersk Line has won the Global Ocean Carrier of the Year award at the Containerisation International 2012 Awards, a ceremony held in London in October.

The shipping giant was described as a 'clear winner' by the judging panel, which pointed to certain service developments described as 'game changing', as well as its web-based customer service support activities and reduction in per TEU emission levels.

'The winner of the 2012 Global Ocean Carrier of the Year Award was Maersk Line for its Daily Maersk service offering and its ongoing development of eBusiness solutions,' the judging panel noted.

He commented that the award was a 'superb endorsement' for Daily Maersk, a product which is delivering 98 per cent on time delivery and had changed the industry and customers expectations.

'An award like this is valuable acknowledgement and an important industry recognition,' he said. 'It feels very, very special as a result.'