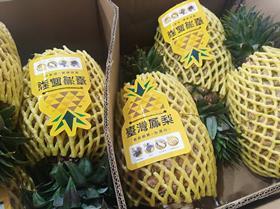 When China suspended pineapple imports from Taiwan citing 'harmful creatures' that could pose a threat to Chinese agriculture, few would have predicted Australia would become a potential destination for the fruit.

Unconfirmed rumours indicate a six-tonne shipment of fresh pineapples is set to be imported into Australia from Taiwan in May.

This has prompted Growcom, the peak industry body representing the Australian pineapple industry, to warn consumers about the product.

Richard Shannon, manager of policy and advocacy at Growcom, said Australian consumers expect the “highest standards” for their fresh fruit and vegetables, and expect the products to be grown safely and sustainably – something that could not be guaranteed about Taiwanese pineapples.

“We understand it would be heartbreaking for Taiwanese growers to now have nowhere to send their fruit. Disruptions to trade caused by Covid-19 and changes in position taken by China continues to also hurt many Australian agriculture exporters,” said Shannon.

“But this shouldn’t make Australia the market of last resort. We expect the Australian government keeps an eye on whether this trade remains fair and legal under World Trade Organisation (WTO) rules.”

Australia’s pineapple industry has also raised concerns regarding whether biosecurity risks that come with importing fresh pineapples from Taiwan can be adequately managed.

“The risk review and the measures put in place are fine in theory. Growers however keep seeing pests and diseases enter Australia for which risk mitigation measures are already in place,” said Shannon.

“We want more inspections of fresh produce arriving in Australia, not just pineapples from Taiwan but across the board.

“So we are calling on the Australian Government to urgently review its position on a biosecurity levy on containerized cargo coming into the country. It makes perfect sense. Those creating risks to both the natural environment and agriculture should be pulling their weight.”

Speaking to Fruitnet, Shannon speculated the shipment of fresh pineapples from Taiwan could be linked with wholesalers looking to sell into the foodservice sector, or alternatively a discount retailer.