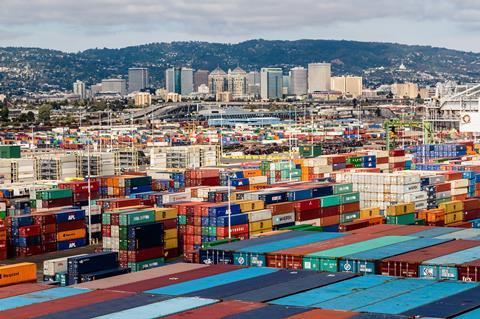 An upturn in containerised import and export volumes at California’s Port of Oakland has management hopeful the recovery process from the US-China trade war is underway. However, another unforeseen storm cloud could dampen trade growth between the two countries once more.

Reporting its results from January 2020, Port of Oakland said import volumes through its terminals were up 7.3 per cent year-on-year, while export volumes climbed 3.3 per cent on January 2019.

The results followed a January trade agreement signaling a break in the US-China tariff skirmish.

“The agreement included a commitment by Beijing to increase purchases of US farm goods,” Port of Oaklandsaid in a release. “That was good news for California and Midwest agricultural exporters who use Oakland’s port as their gateway to Asia.”

The performance has somewhat been overshadowed by concerns over the fast-spreading coronavirus.

Quarantines and other emergency measures have slowed Chinese manufacturing output, prompting shipping lines to cancel some voyages to the US

The port said it could take several months to determine the impact of the contagion on global supply chains.

“The uptick in January was encouraging but we’re hearing from shipping lines that cargo volume could moderate over the next few months,” said Port of Oakland maritime director John Driscoll.

The port reported that its total January cargo volume – including imports, exports and empty container repositioning – declined 0.6 per cent. It said that it handled 17.7 per cent fewer empties in January than in the same period last year.