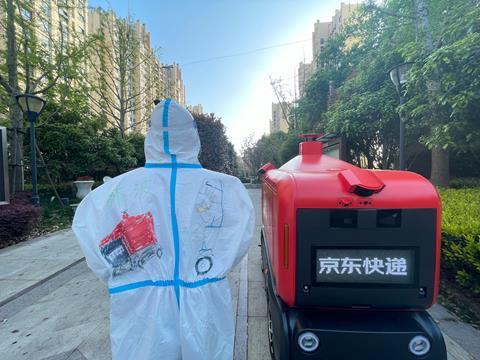 A JD.com autonomous vehicle being used during Shanghai’s lockdown

Chinese authorities announced an extension to Shanghai’s Covid-19 lockdown on 5 April, a decision that is set to prolong the disruption experienced by the city’s fresh produce trade.

Initial plans for a two-stage strategy have been amended and now all of the city’s 26m residents will be locked down. The government has expanded the lockdown to eastern parts of the city and restrictions in the western part of the city, which had been due to expire on 5 April, have been extended until further notice.

Although the fresh produce trade continues to operate as an essential service and efforts have been made to keep ports open, the breadth of the lockdown has meant disruption has been unavoidable.

According to a source at Shanghai’s HuizhanFruit and VegetableMarket, the lockdown has created obstacles, slowed down operations at ports and affected inland transport.

“The Shanghai Huizhan market is still operating, but people coming into the market needs to show negative PCR result (from within 48hrs of testing). Also, people cannot come to the market from outside of Shanghai right now, which is affecting the business,” said the source.

“Land transport has been the biggest issue at the moment, truck movements are very restricted in some parts of China for vehicles from Shanghai. There have been instances of trucks stuck on highways, not allowed off.

International suppliers have been monitoring the situation in Shanghai and across China where other cities have faced lockdowns in recent weeks.

“The resurgence of Covid-19 within China is causing significant disruption across the country, with distribution networks slowing down due to current lockdowns or staff isolation affecting both courier and trucking services. Local manufacturing activity has also contracted for the first time in two years in March,” said New Zealand Kiwifruit Growers Incorporated (NZKGI) in an update to growers.

“Zespri has also notified NZKGI that it is continuing to monitor the evolving situation and is working closely with local officials to mitigate the impact on the supply chain.”

The lockdown has also put pressure on retailers as they manage disrupted supply chains, a surge in demand and increased online orders. JD.com has mobilised its online and offline resources to ensure stable supplies of fresh produce.

“Seven Fresh formed a rapid collaboration with major vegetable and breeding bases and factories across the country to transport supplies, such as fruits, vegetables and other life necessities to stores in Shanghai. So far, the supply to affected areas has been doubled and even tripled than the normal amount to meet the local demand surge,” said the company in an update.

“In the meantime, a number of virus prevention and disinfection measures are strictly followed throughout the preparation of fresh produce in the supermarkets from sorting, cleaning, cutting, packaging to labelling. All staff are required to have a “green health code” to work in the stores or deliver orders to neighbourhoods. Imported cold-chain products are sampled for nucleic acid tests and receipts are kept for traceability.”