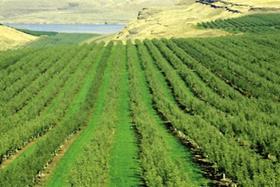 As with virtually every fresh produce category along the North American West Coast this year, the Washington apple season got underway unusually early with the Gingergold variety in late July. It was the first time most industry veterans could remember fruit ready for picking before August.

As the season is off and running early, the crop on the trees also appears to be a record one.A survey of the industry pegs the packout at around 140m bushel (19kg) cartons, which would easily surpass the previous record of just under 130m cartons during the 2012/13 season.If fruit diameter runs toward large sizes – and it appears that it does – the crop could approach 150m cartons this season, a figure that would have been incomprehensible a decade ago.

“The weather has been favourable all pre-season to produce a strong crop,” Marc Pflugrath of Columbia Marketing International told Asiafruit. “Combine that with new plantings of high-yielding trees coming into production and there’s little doubt we should see a record apple crop this year.”

It’s been a hot summer along the eastern side of the Cascade Mountains, which has led to speculation that fruit sizing might be stunted somewhat, preventing the 2014/15 apple crop from hitting the 150m-carton mark.

“There’s a lot that can still go wrong before we get this crop off the trees and into storage,” said Eric Borton of Borton & Sons.“The heat could affect fruit sizing and there’s always the possibility of hail storms since it’s only mid-summer. “

Labour availability is not expected to be a problem this year, as most major growers have programms in place for bringing in foreign workers.

“It’s more likely that there will be a shortage of bins and storage space to accommodate the volume of fruit,” said John Onstad of Sage Fruit.“The industry will need a lot of sales of early varieties such as Gala and Fuji in order to get bins back in the orchards for harvesting late-season varieties.”