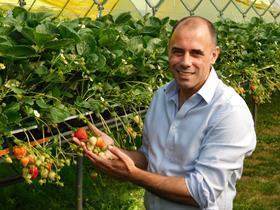 A computer scientist by training, Caccamo is currently NIAB’s deputy director, and managing director of NIAB EMR. He has over 20 years’ experience in life science research and big data, including specific projects to apply the latest DNA sequencing technologies and bioinformatics methods to advance scientific understanding of crop genetics and the interaction of agricultural crops with their environment.

He joined NIAB from The Genome Analysis Centre, now known as The Earlham Institute, in 2015 as head of crop bioinformatics, becoming managing director of NIAB EMR in 2017. He is credited with overseeing a hugely successful programme of growth in the organisation’s research and commercial activity, realising the opportunities offered by its acquisition by NIAB in 2016, alongside a multi-million pound redevelopment programme.

Caccamo will take over from retiring chief executive Dr Tina Barsby in October 2021. NIAB board chairman Jim Godfrey said: “We are delighted to appoint Mario as NIAB’s new chief executive from an extremely high calibre lineup of candidates. His scientific, commercial and managerial expertise offers the right combination to continue and build upon NIAB’s phenomenal expansion in crop research and service provision achieved through the ambitious, wide-ranging programme of diversification, investment, merger and acquisition led by Tina over the past decade.”

Caccamo himself added: “There is no other organisation working in arable and horticulture crops in the UK that can credibly convey the commitment that NIAB has in the translation of science into practice to benefit growers and supply chains.

“NIAB has the scientific breadth and track record to rapidly respond to the challenges imposed by climate change and the opportunities opened by the UK’s current political landscape. This includes cementing NIAB’s leadership role as the ‘go-to’ place for agriculture and horticulture innovation focused on these challenges, for example, in the uptake of protein crops, working towards a net-zero agenda, the effective adoption of automation and data science, and the development of modern breeding technologies.

“As such NIAB is poised to lead the transformation in agriculture, horticulture and food production in the UK and project it internationally, and I am incredibly grateful and inspired to be given this opportunity to guide NIAB and its amazing team to even greater success.”