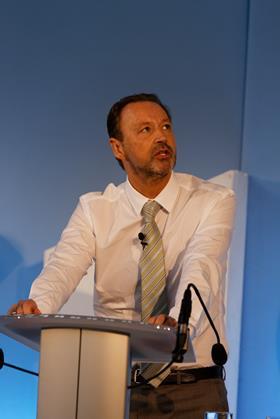 Co-op chief executive Steve Murrells has outlined his vision of how Britain can best navigate some of the major social, economic and environmental issues of the day, in ways which will strengthen rather than weaken communities.

Murrells was due to make a speech at the Westminster Business Forum in London today (27 February), in which he would focus on three connected areas covering the climate emergency, strengthening communities and the forthcoming post-Brexit trade negotiations.

With regards to the climate emergency, he will call upon the retail sector to work more collaboratively and not to use the issue as a means of grandstanding on their own climate promises. He will call upon all the main retailers to work inco-operation to create a unified response to issues such as packaging, plastic and electric lorries.

He will also call out that the most vulnerable members of society can’t be the ones who are disproportionately left to pick up the bill, if diets in the future have to change. Furthermore, he will stress that as we move to a zero-carbon world, there can’t be a repeat of the 1980s, where whole communities were cast aside, as the UK changed its means of sourcing energy from coal to North Sea oil and gas.

In terms of rebuilding a post-Brexit Britain, Murrells will stress that this must be about healing the rifts which exist now in the UK, rather than just protecting and strengthening the interests of the City. He will suggest that a sustainable solution can only be found if we genuinely face into the questions which surround individual and national identities, as well as community cohesion.

He will point to the fact that theCo-opfound its groove again by drawing upon its founding principles, and that the UK should likewise look at its inherent strengths to help answer some of tomorrow’s questions.

A post-Brexit Britain that is serious about healing divides and levelling up the inequalities, must, according to Murrells, re-invest back into democracy in its widest sense, so that politics and local enterprises can be truly representative. As a business with its historical roots anchored in Manchester, he will call out the benefits theCo-opis seeing from a strong local democracy, which is facing directly into the challenges and opportunities it faces in equal measure.

Finally, in respect of any forthcoming trade negotiations, Murrells is urging those involved to deliver outcomes which are both value and values based, so that people are placed ahead of pounds. He will call for trade deals to strengthen not dilute welfare standards, that will enable theCo-op to work easily with its nearest trading partners and allow the UK's communities to prosper, but not to the detriment of the poorest in the world.

In highlighting theCo-op’s support for both British farming and Fairtrade, he will show how ethical and sound sourcing decisions can assist both domestic and global economies, while delivering great value produce to the tables of UK consumers.

Ahead of his speech, Murrells said: “As a nation we face many challenges, but these challenges can be overcome if we trulyco-operate and pool our natural resources together. The climate emergency is upon us but there’s no need to be apocalyptic. We should instead be optimistic providing we take bold and collective action. This issue is too big for grandstanding; co-operation rather than competition must be the way forwards.

“For the retail sector, that means pooling our knowledge and working together to deliver a whole which is greater than the sum of the parts. No one retailer should carry the burden to make this happen, and the government needs to create a level playing field for business, through targets and legislation to back this up.”