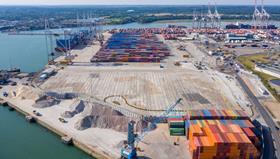 The new facility will be able to hold additional empty containers to meet customers’ requirements, a critical factor in keeping supply chains moving at a time when dwell times at terminals across the UK have increased, it said.

Ernst Schulze, UK chief executive of DP World, said: “The new £3m empty park is part of DP World’s ongoing £40m investment this year at Britain’s second largest container terminal - designed to take it up to the next level as a smart logistics hub - which will provide customers with speed, security, reliability and flexibility. We now have 25 per cent more storage capacity at Southampton than before which will enable us to maintain productivity and service levels for the vital next few months and beyond.

“Operating two ports at Southampton and London Gateway means that we offer unrivalled flexibility and choice to customers. Volumes can be switched quickly and easily between locations, giving customers more control over their supply chains and increasing security of supply for critical goods coming into the UK. No other logistics business can offer this level of flexibility and certainty.”

Southampton has already benefitted this year from the dredging and widening of berths to ensure continued accommodation of the world’s biggest ships and a £1.5m extension of a quay crane rail by 120 metres to ensure that the world’s biggest cranes can service the entire terminal, DP World said. The total investment represents the next step by DP World, the leading global provider of smart logistics, in delivering integrated supply chain solutions for customers.

In the first half of 2021, a record volume of cargo was handled at DP World’s two UK ports, with Southampton seeing throughput between January and June of 995,000 TEU, the second best first half ever, contributing to a combined UK total of 1,883,000 TEU.

Southampton and London Gateway have both been awarded freeport status as part of Solent Freeport and Thames Freeport respectively, further cementing the critical role of both logistics hubs in the UK’s international trade.