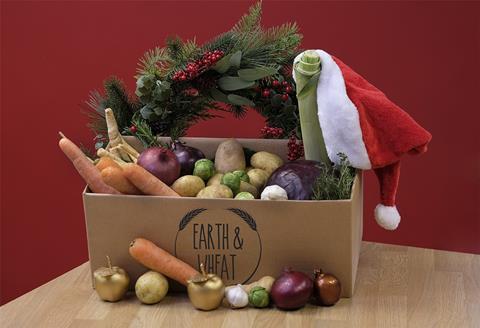 A university student is launching a Christmas ‘wonky veg’ box and for every box sold his company will donate four meals to food charities.

The 21-year-old, who is in final year studying business at Lancaster University, started rescuing wonky bread from bakeries at family-run business, Signature Flatbreads. He then expanded the range to include wonky vegetables saved from selected farms around the UK.

Now in light of the cost-of-living crisis, Eid’s food-waste-fighting brand is rolling out a one-off Christmas Veg Box full of traditional vegetables with the aim of helping the most vulnerable in society.

The free meals will be donated to families and children, the homeless, the elderly, domestic abuse survivors, refugees, people on low incomes, people struggling with mental health and addiction, and more.

The Earth & Wheat Christmas box, which is priced at £19.99 (including next day delivery), will include large potatoes, parsnips, red cabbage, carrots, broccoli, leeks, onions, garlic, herbs – and, of course, Brussels sprouts.

Customers need to order by 12pm on 19 December, with deliveries taking place before Friday 23 December. Existing Earth & Wheat customers can swap out their regular veg box for the Christmas veg box using their online account.

Eid said: “The most vulnerable people in our society are going to be those who suffer most this Christmas as the cost-of-living crisis bites as what tends to happen is people tend to pull back on donating to charities because they are forced to economise themselves.

“At Earth & Wheat, our ethos is all about helping people who are less fortunate than ourselves, as well as reducing food waste to help the environment. That is why we’ve decided to launch a one-off Christmas veg box.”