'Greenkins' set to be Halloween hit 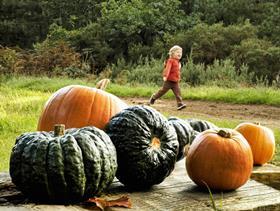 Waitrose is capitalising on the popularity of Halloween with the launch of an unusual green pumpkin.

Dubbed the ‘Greenkin’, the new addition is a dark green pumpkin with knobbly and gnarly skin. It is an Iron Cap variety, which comes from the Kabocha family and is shaped like a squat pumpkin with intense yellowy-orange flesh. They weigh two to three pounds and are grown from seeds that were planted in May.

The ‘Greenkins’ join white Ghost Pumpkins, a selection of nobbly and gnarly gourds, mini Munchkins and two sizes of carving pumpkins at the supermarket, which says that searches on its website for pumpkins are up over 100 per cent compared to last year.

'While Halloween celebrations will no doubt be a little different this year, we still expect people to have fun with spooktacular doorsteps and tablescapes and I am sure the Greenkin will be the star of the show this Halloween,' said Waitrose pumpkin buyer Sophie Bull.

The Greenkin has been supplied by Sussex grower Barfoots, and is available in Waitrose stores and at Waitrose.com from 14 October, priced at £3.

It comes as Waitrose predicted that Halloween 2020 would be the biggest yet, with sales of pumpkins at the retailer up 33 per cent compared to this time last year, and sales of gourds up 13 per cent. Ghost pumpkins are proving especially popular, with Waitrose reporting it had to increase its order by over 20 per cent this week.

It's not just decorative pumpkins that are doing well either, with edible pumpkin sales also on the rise and searches for Halloween recipes up.