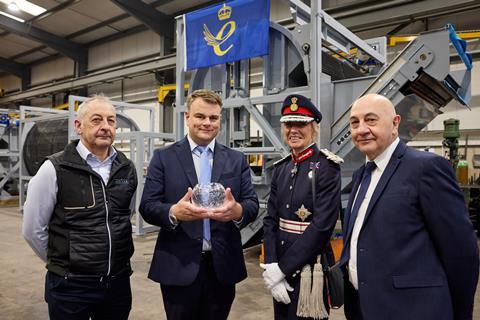 Haith Group has been presented with its second Queen’s Award for Enterprise trophy by His Majesty’s Lord-Lieutenant of South Yorkshire, Dame Hilary Chapman.

The Doncaster-based designer and manufacturer of vegetable handling equipment was recognised in the 2022 innovation category for its Rota-Tip Top Eject, an energy-efficient and “highly reliable” box tippler used to unload delicate fresh produce in packhouses and food factories worldwide.

The Rota-Tip TE is the second Haith machine to receive a Queen’s Award for Enterprise in the innovation category following the triumph of the company’s Root Veg Polisher in 2010.

In the UK, Haith estimates that 95% of the potato suppliers to UK’s supermarkets use a Rota-Tip, meaning the award-winning machine handles the vast majority of potatoes sold in Britain.

The award was presented by Chapman. Also attending the ceremony at Haith’s Armthorpe factory were Phil Barraclough, Lieutenancy Officer for South Yorkshire, and Dan Fell, CEO of Doncaster Chamber.

Speaking at the presentation on 22 October, the company’s managing director Duane Hill said: “We are immensely proud to be receiving this award, our second Queen’s Award for Enterprise in the innovation category, the most prestigious award a UK business can receive and an award that wouldn’t have been possible without our dedicated team.

“I would like to sincerely thank everyone involved in developing the Rota-Tip TE but give special thanks to our customers, who set us the challenge of designing a way to empty vegetable boxes in a safer and more efficient way.

“I also need to thank David Haith, who led the design of the original concept and Nigel Haith, who made the patent application and entered the Rota-tip to be considered for a Queen’s Award for Enterprise.”

The Queen’s Award for Enterprise are regarded as one of the most prestigious accolades for UK businesses and the entry process is rigorous and highly competitive. The winners are announced annually on 21 April, the birthday of Her Late Majesty The Queen.

The award’s presentation on 22 October follows a reception attended by Hill at Buckingham Palace in July.

Haith was established in 1947 by the late Geoff Haith and has grown to employ over 120 people, who design and manufacture a comprehensive range of vegetable handling machines, spanning grading, washing, bulk handling, weighing, pre-pack systems and water treatment solutions.

Haith’s machines are used by some of the world’s largest food producers and packing companies, along with farmers of varying sizes in the UK and overseas.