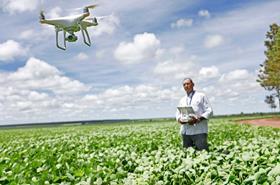 Agriculture has been altered dramatically over the last century, from horse-drawn ploughs and handpicking to the autonomous, self-drive vehicles we see on the fields today.

With the earth’s population rising to an estimated 9.7nn by 2050, the pressure to increase yields and improve productivity has never been more important.

In order to sustain the rising population, farmers and harvesters need to be able maximise output and efficiency in the face of slimming profit margins.

Mechanical and genetic innovations have made a huge impact on farming communities over the last few decades, but agriculture as a whole remains less digitised compared with other industries.

Technology can be transformative, and agritech enables farmers to become more efficient and sustainable, allowing for better risk and variability management to optimise yields and improve economics.

Poor network range and connectivity in less-developed countries and the cost of hardware has so far halted great progress for IoT in the industry.

However, with the cost for devices becoming more competitive, farmers have begun to utilise data to monitor variables such as crops, soil conditions or the weather.

According to McKinsey, enhanced connectivity in agriculture could add more than US$500bn to global gross domestic product by the end of the decade.

When observing the industry, we see a distinct favouring for three different megatrends -robotics and IoT, connectivity and sustainability. Here, we discuss how these technologies help bolster farming communities.

Robotics and IoT covers a wide range of innovations in agriculture, from drones to smart sensors. These innovations work to both reduce workload for farm workers and also increase the efficiency of operations.

Drones for example gives farmers a much better and immediate view of their land, reducing the need for farmers to spend large amounts of time on patrol and inspecting areas of their farms.

This is especially useful in countries with large ranches such as the US or Australia where farms are regularly made up of vast areas of land.

Other innovations in this sector also include smart management and control systems for processes such as crop seeding. By making seeding as efficient as possible yields can be optimised, and costs minimised.

Farms are therefore more cost efficient as a business as well as being able to help tackle the issue of increased demand for food.

Finally, GPS controls paired with sensors could advance the use of smart and autonomous farm vehicles. Farmers could operate a variety of equipment on their field simultaneously and without human intervention, freeing up time and other resources.

Autonomous machines are also more efficient and precise at working a field than human-operated ones, which could generate fuel savings and higher yields.

By digitising their processes, farms are able to take a holistic look at their business. It gives them the chance to use the data that they receive from their smart controls as well as other sources to see where their inefficiencies lie.

In tandem with smart IoT products, connectivity is the way forward for creating a farming industry that is working to its full potential.

There have also been great advancements in the controls of agriculture vehicles, for example adjusting lighting and mirrors or navigating attachments on the front for ploughing and seeding.

These controllers are designed to withstand extreme agricultural environments and can be used in high or low temperatures or extreme humidity.

One of the main challenges for farmers when trying to increase their yield to cope with increasing demands is working out how to do so in a sustainable way.

One of the most attractive ways to farmers to achieve this is to work to reduce waste. For example, water waste is a huge issue in the farming industry so introducing solutions that help to reduce water waste, such as control spray nozzles, will help minimise the losses.

With water shortages becoming an ever-increasing issue for farmers, technology that helps them to reduce their use of finite resources helps them individually to reduce their costs but also creates a more sustainable industry as a whole.

We have seen the industry take great steps towards modernisation, and agritech will continue to play a huge role in bringing farming into the 21st century, supporting global populations for years to come.