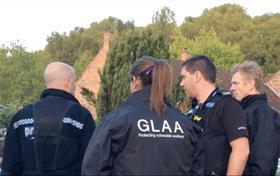 The Gangmasters and Labour Abuse Authority helped with the police operation

Four people have been charged with human trafficking and gangmaster offences against fruit pickers after dawn raids in Perthshire.

Three Romanian men aged 37, 39 and 53 were detained in the Blairgowrie area of eastern Scotland, along with a 53-year-old Romanian woman, as part of Operation Barramundi.

All fourappeared before Dundee Sheriff Court on 3 May andwere charged with offences under the Human Trafficking and Exploitation (Scotland) Act 2015. They allegedly had links to the region’s fruit picking industry.

Information received from the UK government’s National Referral Mechanism (NRM) indicated that a number of workers had been trafficked from Romania and exploited.

According to Scottish regional newspaperThe Courier, the alleged trafficking ring is said to have been operating in the Blairgowrie area for a number of years.