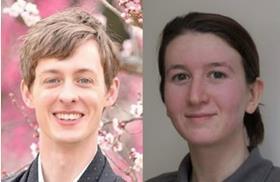 Kew horticulturist and Pershore graduate Richard Moore has won Young Horticulturalist of the Year 2019 after an exciting grand final at Kew.

Moore, who graduated with a first-class honours degree in Horticulture in 2017, will receive the £2,500 travel bursary provided by the Percy Thrower Trust.

He will be able to use it to fund horticultural travel anywhere in the world and is planning a trip to Japan to study various aspects of horticulture in the country.

“Being a part of the Young Horticulturalist of the Year has been an incredible experience which has pushed me to improve my horticultural knowledge and has allowed me to make many new friends and connections within the horticultural industry,” he said.

Moore was tied with Emily Marston at the end of the competition which then went through three tie-break rounds. Normally second place wins a prize of £950 but this year the competition's main sponsor, Shropshire Horticultural Society, announced that they would give Marston, a horticultural apprentice at RHS Harlow Carr, a £2,000 travel bursary.

To take part in the 2020 contest, pleasevisitwww.horticulture.org.uk/young-horticulturist-of-the-year. Entry to the competition is free and open to anyone below the age of 30 on 31 July next year.