Labour pledges to get closer to farming 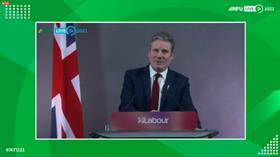 Labour leader Sir Keir Starmer has called on the government to do more to back British farming and has pledged to bring his own party closer to rural and farming communities.

In a Labour leader’s first speech to an NFU Conference since 2008, Starmer said that the government should encourage people to buy more British food, address serious issues with farm payments, and invest in agricultural skills, including a wage subsidy to create new apprenticeships.

Insisting he wanted a “new relationship between Labour and British farming”, Starmer said Labour’s next manifesto will “offer hope and optimism to rural communities”. His proposals include looking at whether more of the £2.4 billion public spending on catering could be spent with British farmers and producers, and addressing concerns three-quarters of farmers are reportedly worried that the government’s new farm payment schemes won’t keep them afloat.

The Labour leader argued that 10 years of Conservative rule has weakened the foundations of rural communities, hollowing out services and failing to invest in infrastructure. He added that Labour’s proposed British Recovery Bond would allow longer-term investment to tackle the “permanent insecurity” faced by businesses, farmers and landowners in flood-hit communities.

He also announced that he has tasked Labour’s shadow secretary of state for environment, food and rural affairs, Luke Pollard, with leading a review of Labour’s rural policy in the coming months.

“This is the first time a Labour leader has addressed the NFU Conference since 2008, and I think that’s indicative of the perceived distance that’s grown up between Labour and the countryside,” Starmer said. “It’s more perception than reality, because in the last year Labour stood with British farming and stood up for rural communities, from fighting for high food standards, to protecting family farms. But it’s a perception that we can’t ignore any longer. And we won’t ignore any longer.”

On the proposed British Recovery Bond, Starmer said: “This kind of investment: long-term, green, targeted at areas starved of government funding for a decade, and designed to build security, resilience and prosperity for the future, is exactly what I have in mind when I say that Recovery Bonds could be used to build the infrastructure Britain will need in the decades to come. And it’s what I mean when I say this has to be a recovery that works for all parts of the economy and all parts of our country.”