New tool in the fight against frost 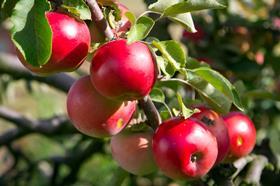 A new OF&G-registered natural plant bio-stimulant is promising to minimise or eliminate frost damage by stimulating the production of AFP (Anti-Freeze Protein) in flowering fruit crops.

AminoA ICEAAX is a new product in the AminoA bio-stimulant production line, having been developed out of specific demand from a grower who had seen their apple and pear orchards wiped out by frost.

Losses can be catastrophic in flowering crops such as apples and pears, and while frost injury rarely causes complete crop loss in soft fruits, as the strawberry plant produces flowers over a two-to-three-week period, flower buds are also particularly susceptible to frost injury any time after bud break, at temperatures of -1°C or lower.

Frost damages the centre of the flower, with the centre turning black while the petals appear uninjured. The blackening occurs within a few hours to one day after the frost, and the frost can also damage the developing fruit, deforming the berries.

ICEAAX is described as an easy-to-use liquid L-isomer amino acid complex that stimulates the production of AFP in flowering fruit crops. By applying at flowering, immediately before a frost event, AminoA ICEAAX lowers the freezing point of the cell cytoplasm, enabling the crop to resist the late frost.

“Growers have traditionally used methods such as lighting fires overnight in flowering orchards, or irrigating to prevent frost damage,” explained Richard Phillips, AminoA managing director. “We knew our existing range of bio-stimulants provide significant frost tolerance in soft and top-fruit crops. Now ICEAAX uses a high concentration of L-isomer amino-acids to provide reliable results down to -3°C depending on RH and duration.

“Amino-acids, especially Threonine, Proline and Glutamic acid, act like natural anti-freeze and reduce the freezing temperature of the cytoplasm. They also facilitate osmosis to enable water molecules to move into the intercellular space, where freezing is less damaging than intracellularly. These amino-acids are the building blocks of the anti-freeze proteins, which some plants are able to manufacture.'

Approved for use in organic systems by OF&G, AminoA ICEAAX contains only fully absorbable L-a type amino-acids, and is suitable for use in all crops.

Although generally compatible with fungicides and insecticides, it is recommended to carry out a simple jar compatibility test first, the company pointed out. AminoA ICEAAX should not be mixed with HRAC Mode of Action B herbicides.