NFU calls for better communication with farmers on HS2 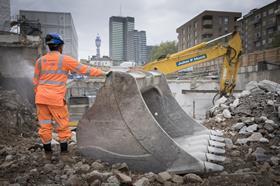 Construction of the first phase of the line is ongoing Photo: HS2

The NFU has called for better communication with landowners and farmers following Boris Johnson’s announcement that the controversial HS2 high-speed rail link will be built.

The first phase of the route will be between London and Birmingham, with a second phase connecting Birmingham to Manchester and Leeds.

Spiralling costs, delays to construction, damage to wildlife and the uprooting of residents and businesses – including agricultural ones – have led to serious criticism of the project, which is being run by the executive non-departmental public body HS2 Limited.

Responding to the Prime Minister’s announcement on 11 February, NFU president Minette Batters said the government needed to minimise the impact on farm businesses; give farmers longernotice periods before taking land on a temporary or permanent basis; and paying out “fair” compensation as quickly as possible.

“The present system is taking far too long, and farmers, their businesses and their families are suffering,” she said.

“HS2 must also spend time understanding how farm businesses will be impacted by the construction works and reach compensation agreements at an earlier stage so that agricultural buildings and farmhouses can be relocated and built before possession is taken. This is the only way some farm businesses are going to stay operating.”

Batters added:“For the past 10 years HS2 has had a considerable impact on our members along the proposed route with compulsory purchases taking hundreds of acres of land and in some cases closing down farm businesses.

“Having to deal with so much uncertainty and the financial pressures has been extremely distressing for those farmers and their families.

“We recognise the importance of investing in the nation’s transport infrastructure but it’s crucial that only land needed to build the line is taken to minimise the impact on our farm businesses.

“We must think responsibly about taking land out of food production, particularly as we face a multitude of challenges and opportunities with life outside of the EU. And we must not forget the vital role farming and land use must play in the global challenge of climate change.”

Transport secretary Grant Shapps told MPs in September that the first trains on Phase 1 of the line between London and Birmingham may not run until some time between 2028 and 2031.