Number of people eating out falls 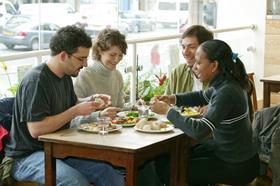 The number of people eating out has dipped and the average spend per meal has fallen according to a new report on the UK’s foodservice sector.

Frequency of eating out has also fallen from an average of 2.21 times to 1.92 times year-on-year, the report found. The annual Eating Out-Look survey is commissioned by foodservice analysts Horizons and conducted by YouGov.

It found that, despite a steady increase in the number of people eating out since 2008’s recession, this fell by two percentage points in the last year, as 69 per cent of respondents said they had eaten out in the previous two weeks of the survey, compared with 71 per cent doing so a year ago.

Expense, lack of time, healthy eating and hygiene were among the commonly-cited reasons why people chose not to eat out, and the decline was particularly evident in the 35-44 age group. Last summer, almost three quarters (72 per cent) of respondents to the survey in this age group had eaten out in the previous two weeks, compared to 62 per cent in 2015.

“The 35-44 age group are those most likely to have the biggest financial ties – often having dependent children, house moves to pay for and foreign holidays to save for,” said Horizons’ foodservice analyst Nicola Knight.

“If this age group is once again starting to spend on higher ticket items like these, or perhaps new cars, fridges or DIY, it might be that eating out becomes one of those expenses they are prepared to forego temporarily.”

In contrast, the report found that 18-34 year olds are the most likely age group to be eating out, while eating out among over 55-year-olds is also becoming increasingly common.

“The slight dips that we are seeing in pockets of the eating out market suggests that some consumers, particularly the squeezed middle, are choosing to spend their money elsewhere,” added Knight.

“We are comparing this year’s figures with those of 2014, which was a particularly strong year for eating out - it’s important to remember that the overall trend is positive and the market is stronger than it was three years ago.”