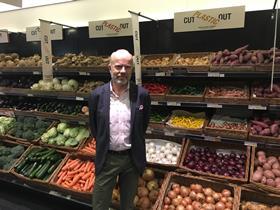 Big business loves an upbeat PR message, and it’s hard to think of another crusade that the major retailers have got behind in recent times to such an extent as packaging reduction. As Sir David Attenborough’s seminal Blue Planet II brought calls for a radical rethink of the way our food is packed, supermarkets have stepped up with myriad initiatives aimed at cutting out single-use plastics across stores.

Two years ago a Change.org petition calling for a plastic-free aisle to be introduced to supermarkets garnered over 80,000 signatures, and it’s clear the voices are starting to be heard. Campaigning group A Plastic Planet, which started the petition and directed it at supermarket chief executives, has been working with retailers at home and abroad to help them bring the vision to market. The organisation says its single goal is “to ignite and inspire the world to turn off the plastic tap”, and in Belsize Park in north London, one innovative store is leading the charge when it comes to eliminating the use of plastic altogether.

Thornton’s Budgens, which operates under the strapline ‘Your community supermarket that really cares’, last year set out on a three-year mission to stock 3,000 plastic-free lines across the store. Inspired by the trail blazed by Dutch retailer Ekoplaza, Thornton’s has been steadily upping the number of products on which it has been able to replace plastic.

Founder Andrew Thornton explains that, ten weeks after settling on the plan, his store launched 1,800 plastic-free products on 8 November. “We wanted to show the big guys that it wasn’t as difficult or complicated [as they thought],” he explains. “At the last count we have 2,151 lines across 28 different sections of the store, the idea being that if you want to do a plastic-free shop, you can. We have every staple covered.”

On fruit and vegetables, Thornton says the store previously had a mixture of plastic and non-plastic packaging, but believes the new loose-centric aisle is aesthetically far more attractive. Where packaging is needed, produce is packed into beechwood netting, made from the offcuts of beechwood saw mills. There are some hurdles to overcome – certain grapes and bagged salads are still in traditional packs – but fruit and veg is at the vanguard of the offer.

Such a grand aim is not without its challenges of course. Thornton says some customers have complained that you can’t buy cheap tomatoes any more because the store is focusing on loose, premium varieties and those sold in recyclable punnets, while it has been more difficult to get the most perishable of products switched to more environmentally friendly packaging. “A number of suppliers have said they can get berries to us [in non-plastic packs], but we haven’t got that yet,” he points out. “And we know that Florette in Germany have a compostable bag but we haven’t seen that here yet. We are speaking to all our suppliers to see what they can do.”

Critically, so far Thornton reports no increase in the amount of waste generated in store, and also says more customers have been visiting, with an average four per cent increase in sales since the initiative launched. “One woman emailed me to say she gets a bus an hour each way every week to come here because she wants to shop plastic-free,” Thornton recounts with pride.

The next milestone for Thornton’s Budgens is 3,000 lines, though Thornton is realistic that the pace is likely to slow as the focus turns to more difficult products to switch out of plastic. “We’ve done the easy ones first so it gets harder and harder,” he says. “There are products that we’ve got in that just haven’t sold, and we’ll have to move them and delist them, so our numbers could come down. And because some of the plastic-free products tend to be really top-end products, they are quite pricey. It’s not that they’re bad value, they’re just not in everybody’s reach.”

Challenges then to overcome. But with a visible counter showing customers the ever-rising number of plastic-free lines, there is clear motivation and desire to complete the dream of becoming an entirely plastic-free supermarket.