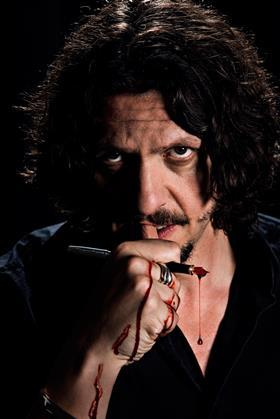 In more ways than one does Jay Rayner evoke a telamon holding up the entablatures of antiquity. His stature and Samsonian locks certainly give an impression of classical proportions, but he also appears to be holding aloft, with a mighty grimace at times, the precarious soul of British food.

Famed for his colourful invectives against Britain’s more hapless restaurants, Rayner is a writer who mixes Apollonian and Dionysian threads; a more reasoned politics with the guttish senses. In the wake of current events, however, now seems a time for the head. His 2013 bookA Greedy Man in a Hungry Worldunpacked a lot of what the customer often fails to see behind the reams of food on offer to the modern shopper, not least the stubborn failures of our supply chain.

“I don’t want to sound like some sort of soothsayer but everything I said then was absolutely correct,” Rayner states. “We have become used to food being very cheap and as a result we have made an awful lot of our fresh produce unsustainable economically.”

With a lack of agricultural investment as a result, Britain became increasingly reliant on food imports. Rayner says: “This has left us extremely vulnerable to foreign shocks. Following the huge price rises in 2008, I said at the time if something else comes along we are in a precarious situation. I did not predict that the situation would be self-inflicted.”

A noted remainer ahead of the Brexit vote, Rayner was asked by Defra secretary Michael Gove in 2017 to attend a roundtable on British food, which he says he declined following a lengthy online spat with the MP. Nevertheless he did submit a letter, published on his website, which went viral among the industry for its damning assessment of Britain’s decision to leave the EU – a decision backed by Gove. “Where our food supply is concerned, Brexit is the only subject. It is implicated in every single aspect of our food supply chain and risks imperilling the very health of the nation,” he wrote then.

In the wake of dire predictions following a no-deal, building a more self-sufficient supply base has returned to the agenda. Rayner, who rejects localism for the sake of localism, is nevertheless in favour of boosting the British grower base. “We are never going to be 100 per cent self-sufficient, but as soon as you get north of 70 per cent then you tend to be self-sufficient in several products,” he says.

One of his main concerns for the industry has been the downward price pressure on farmers who get blunted support from the Groceries Code Adjudicator, a position he says “misunderstood” the way the supply chain works when it was created.

“By restricting themselves just to the relationship between supermarkets and direct suppliers, they ignored the fact that farmers are often at the mercy of the supermarkets at second or third hand (or more): their produce often becomes the raw ingredients for manufactured products then supplied to the supermarkets by one or two or even more links in the chain,” he summarised in his letter to Gove.

What does he make then of the noted retail trend of consolidation, with Sainsbury’s proposed merger with Asda awaiting the CMA investigation? “The bigger the purchaser, the more of the sector they control, so it could be a problem for the farmers,” he reasons. “They need to be paid enough, not just to make a profit but to invest.”

Rayner reasoned inA Greedy Manthat supermarkets could and should pay more to increase the quality of their products, but with margins already extremely low on fruit and veg, does he think the public might have to pay more in future? He says he has faced criticism for suggesting price rises on fresh produce in a era of food banks. His response: “If you attempt to model a food supply chain based on the needs of poverty, you will destroy it. You should be looking at the economic contracts within society, and to pay the true price of food you need to have an economic system fit for purpose.”

He points to new kids on the block Lidl and Aldi as examples of retailers that have brought new supply models, without sacrificing quality or ethics. “I think the big story in the last eight to ten years is the rise of the discounters. The big four assumed that their customers would not sacrifice choice for price. What shoppers discovered, however, was that there was no less quality at all. There was a massive gain in savings, and they were very happy not to have 47 brands of biscuits.”

“It does seem to me, allowing suppliers enough profit for them to invest is to be at the forefront of supermarkets minds,” he adds. “And it’s also about dealing with the economic structures that don’t allow people to pay the right price for food. We have got to start looking at something.”

Speaking to FPJ on the day of the well-publicised EAT-Lancet Commission report outlining a sustainable diet for the future, Rayner doesn’t have any beef with a report that urges us to eat much less of it. “The real issue is that while EAT-Lancet can publish a paper like this, the big issue is the rise of the middle classes in Asia. In 2000 about 14 per cent of the population were considered middle class; by 2050 it will be 68 per cent. As they expand, their meat consumption is going to rise to meet ours. I want to find out who the person is that is going to go to China and say that they can’t carry on eating meat because we have already eaten it all.”

The explosion of meat consumption worldwide, painfully evident in the razed forests of Brazil and Asia, has arguably revived the vegetarian and vegan argument, although Rayner says it still feels like it’s “in a frothy stage”. “One of the problems we face is in finding out how serious a movement is, or if it’s just noise. But there’s no doubt something is moving.” But in the dining scene at least, which has moved away from the French tradition of meat-centrism, Rayner says: “I would refer you to my restaurant reviews where non-meat dishes are not the ghettoised plates any more. We’re seeing this more and more and that’s a very good thing.”