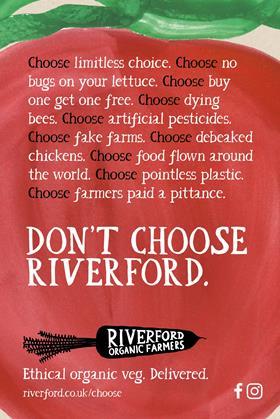 Organic veg box scheme Riverford has launched a thought-provoking new advertising campaign which riffs on the iconic 'choose life' scene in Trainspotting and highlights the negative impacts our food choices can have.

The campaign makes the point that consumers have the power to choose more ethical and environmentally-friendly fresh produce, highlighting both negative and positive aspects of the fresh produce supply chain.

Negative aspects such as limitless choice, artificial chemicals and fake farms are listed next to the 'Don’t Choose Riverford' message, while positive messages such as local produce, top animal welfare, and a business owned by its staff feature alongside the ‘Choose Riverford’ call to action.

“The creative is designed to stir up the audience and get them thinking. We want our ads to be brave and set us apart from our competition; no one notices safe or careful advertising,” said Riverford’s senior designer Martin Ellis.

“The moment is right; the market has suddenly woken up to these ethical questions, so we think the campaign is set to work better than ever.”

Guy Singh-Watson, who set up the Devon-based supplier 30 years ago, is an outspoken critic of consumerist culture and excessive choice.“The market is failing; it is not giving people the choice they truly want – the choice to be part of the solution, not the problem,” he said.

Singh-Watson has also released avideo rant, entitled ‘Do consumers have a choice?’, to encourage further debate on the topic.

For the Choose campaign, a social media strand aims to incorporate Riverford customers, who are encouraged to share the reason why they choose the company under the hashtag #IChoose.

The company has also designed and created 10,000 limited-edition ‘Choose’ veg boxes that include a space for customers to write why they choose to shop with Riverford. Boxes are collected and reused by the company so the aim is to create a message-in-a-bottle style chain of messages while demonstrating the reusability of boxes.

Other channels include paid Facebook and Instagram adverts, and adedicated micrositebuilt and designed in-house, with an article explaining the evidence and information behind each Choose message.