Shoppers dreaming of a green Christmas 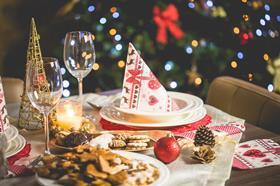 Sustainability is high on shoppers' agendas this Christmas, with as many as 71 per cent saying they are going to take specific action to reduce their environmental impact over the festive season.

That's according to new research by IGD, which polled consumers on their habits and intentions ahead of the crucial Christmas shopping period.

Over half of shoppers surveyed (55 per cent) said they intended to reduce their impact by buying more loose fruit and vegetables - a figure highest among those aged 55-65 (63 per cent) and in Scotland (63 per cent) – while a third (34 per cent) plan to avoid buying products that have a lot of excess packaging.

Some 32 per cent intend to buy more products that are locally produced, and 31 per cent plan to seek out products with easily recyclable packing.

Shopping local and the location of production are more important drivers of product choice at Christmas than at other times of the year, IGD found. Indeed, when purchasing products at Christmas the majority of shoppers (80 per cent) say that where it’s been produced is important to them, compared with 71 per cent normally.

Shoppers are also conscious of the locality of their products this time of year, with 67 per cent saying the distance travelled is important, up from 62 per cent normally.

Shoppers are intending to visit a specialist store (64 per cent) and farmers' markets (40 per cent) over the season, with usage up by six and four per cent respectively compared to last Christmas.

A notable number of households will be reducing the amount of meat they eat this year, with 13 per cent planning to prepare a vegan or vegetarian meal (vs. nine per cent in 2018). Significantly, plant-based alternatives have entered the top-five choices for main meal options for Christmas day for the first time this year, coming in above ham (12 per cent), pork (eight per cent), seafood (eight per cent), lamb (eight per cent) and salmon (six per cent).

Simon Wainwright, director of global insights at IGD, said:“More shoppers intend to visit specialist stores, such as butchers or greengrocers, famers' markets or premium supermarkets this year than last. This is despite the intent to spend less on Christmas dinner, perhaps implying a reduction in quantity purchased in favour of quality. Large stores in particular could face a challenge here - calling out quality, sustainability and welfare messaging year-round could encourage shoppers to visit these stores more frequently at Christmas.

“While environmental concerns are clearly important at this time of year, we can see that there is an opportunity for retailers and manufacturers to engage with shoppers more in this area during the season to make it as much of a priority as at other times of the year. The focus here should be on taking action to reduce the environmental impact of products so shoppers can buy the gifts they want without compromising on their sustainable ambitions.”