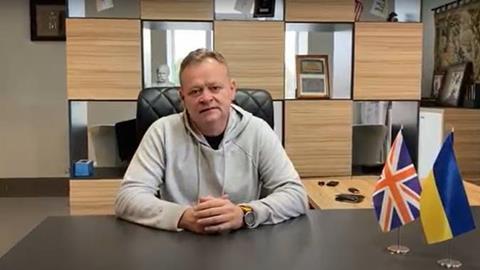 Farmers in Ukraine who have faced up to the horrifying and devastating challenges of the Russian invasion have collectively been named as the NFU’s 2022 Farming Champions of the Year at the Farmers Weekly Awards.

Despite the invasion by Russian troops that started in February this year, Ukrainian farmers across the country have continued to grow food, look after their animals and secure their livelihoods.

Speaking via video at the Farmers Weekly Awards ceremony in London this week, Andrii Dykun, chairman of the Ukrainian Agri Council, accepted the award on behalf of all Ukrainian farmers and thanked the UK for its support.

Dykun said many Ukrainian farmers had lost everything, “particularly farmers in occupied territories who have experienced Russian soldiers destroying farms, stealing machinery and equipment and preventing farmers from sowing their crops”, he said.

Presenting the award, NFU president Minette Batters said: “No-one has earned this award more than the farmers of Ukraine who have endured eight months of hell since the Russian invasion began.

“We often describe farmers as a community. More often than not we mean a British community. But this has been a time where farmers have demonstrated we are a global community as we all want to show support for our fellow farmers in Ukraine who are going through an ordeal which we in Britain find impossible to imagine.

“It’s true that we are facing unprecedented inflationary challenges at home, but we are not seeing our livestock bombed and burnt alive, our fields becoming landmine death traps - and we’re not facing the horror of whether our friends and family will make it through the day. The horrific war in Ukraine has also exposed many countries, including the UK, that have failed to take the role of food production and food security seriously.

“This award normally goes to a person who’s gone above and beyond, but this year we wanted to show solidarity to all our farming friends in Ukraine and we look forward to the time that we can present this award to them in person.”