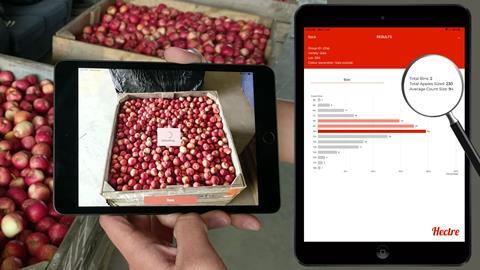 Spectre sizes up gala apples straight off an iPad

Hectre has been named a winner in the AgTech Breakthrough Awards for a second consecutive year.

The awards programme celebrates innovation across the ag-tech sector. It aims to recognise the best companies, products and services in the industry.

“With over 1,600 nominations for our third annual awards programme, the competition was fierce,” said Bryan Vaughan, managing director of AgTech Breakthrough.

Matt Blomfield, chief executive and co-founder of Hectre, said the award was fitting recognition for the New Zealand-headquartered ag-tech company, which has extended the reach of its orchard management and early fruit sizing solutions over the past 12 months.

“To win one award is wonderful. But to back it up this year with a successive win has just been amazing and is fantastic recognition of the industry leadership position we now hold,” explained Blomfield.

“What we’ve achieved over the past year is all down to the efforts of our outstanding team and the fantastic support of our customers all around the world.”

In another major milestone for Hectre, the company’s mobile fruit sizing AI app, Spectre, sized its 27-millionth piece of fruit this month.

“The technology is popular for its simplicity of use and fast reliable results,” according to a release from the company. “To use Spectre, orchard and packhouse staff simply take a photo of a full bin of fruit on an iPad, and within seconds they receive a size distribution graph detailing the size band estimations of the bin of fruit, delivering valuable data for improved decisions around storage, sales and packline planning.”

Initially built for apple growers and packers, Spectre models for both citrus and cherries are now being used by industry.

Having doubled its market share in the highly competitive US apple industry in the past year, Hectre is now bringing its technology to Australia. It will showcase Spectre at Apple & Pear Australia’s Grower R&D Day on 1 September.