Thanks to its regular cargo flights to Asia, Mexico is set to play a more prominent role in Chilean fruit exports to Asia in future 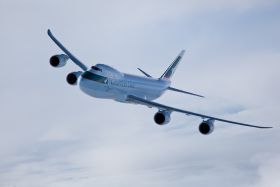 A number of Asian carriers operate cargo flights from Mexico

Chile is exploring Mexico’s potential as a transhipment hub for exports to Asia. Earlier this month a Chilean delegation visited Mexican air and seaports to study ways of maximising key trade routes to Asia.

The group, made up of public and private entities including the Agricultural Livestock Service (SAG) and Asoex, held meetings with national and regional food safety authorities and inspectors from the Port of Manzanillo to analyse the workings at the port, which could play a key role in Chilean fruit exports in the future.

The Chilean authorities believe Mexico could play an important role as a hub for sea-air shipments. At present there are few direct air services linking Chile and Asia and many exporters seafreight fruit from Chile to Los Angeles from where it is sent by air to destinations in Asia. One option being analysed is sending produce by sea to the port of Manzanillo and then transporting it to Guadalajara from where Cathay Pacific and Korean Airlines operate regular flights to Hong Kong and other destinations in Asia.

Asoex claims this would cut costs and reduce journey times to Asia and said a number of commercial trials of blueberries to South Korean had already been successfully carried out via this route.