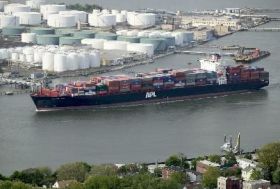 Together with its Asia Caribbean Express (ACE) service that directly connects Asia to the Caribbean, APL’s expanded Asia-Latin America service network promises a more extensive service coverage and best-in-class transit times across the major economies in Asia and Latin America, APL said in a press release.

The CDX service’s eastbound route boasts the industry’s fastest transit time from Busan to Mexico in 15 days, Shanghai to Mexico in 20 days and Central China to San Antonio in 33 days, APL said.

Its westbound route also offers competitive transit times that are designed to facilitate shipments of fresh fruit and perishable commodities from Mexico and West Coast South America, to Japan and China; it only requires 15 days for cargoes to transit from Mexico to Yokohama via the CDX service.

The CDX service will commence from Kaohsiung on 4 April with the following port rotation:

Shipments on board the FCX service can expect an unparalleled transit time from Korea and China to Ensenada in 12 and 17 days respectively, APL said. Cargoes from North China to Peru and Chile will arrive in 28 and 33 days respectively.

The FCX service will commence sailing from Xiamen on 7 April with the following port rotation:

APL's Caracara Express (CRX) service is a weekly direct service that calls China, Mexico and West Coast South America. It promises the fastest transit time from Central China to Mexico in 16 days, APL said. Likewise, 29 days is all it takes for cargoes to get to China from Chile, APL added.

The CRX service will commence sailing from Hong Kong on 17 April with the following port rotation: