Speaking up on shipping challenges 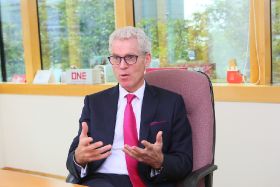 In 2017, three Japanese liner companies formed to create the sixth-largest global shipper. From this position, Ocean Network Express (ONE) CEO, Jeremy Nixon, will discuss the current and new challenges that the container shipping industry faces at Cool Logistics Asia.

Nixon has been actively engaged in the container shipping industry for the past 30 years, and brings a wealth of knowledge to share with attendees to Cool Logistics Asia.

During his presentation, Nixon will address key challenges like rising fuel costs and emission legislations while shedding light on how technological advancements like digitisation and blockchain can benefit the industry.

“The last three years have seen tremendous changes in container shipping with mergers on an unprecedented scale and takeovers including the spectacular container shipping failure in 2015 of Hanjin Shipping,” noted chair of Cool Logistics Asia, Alex Von Stempel.

“The key issue Mr Nixon will be expected to address at Cool Logistics Asia is whether the shipping industry will emerge stronger as a result and provide pointers what the fresh produce sector in particular may be able to expect in the future,” he said.

ONE has recently invested in 14,000 refrigerated containers in order to meet future demand. The company is eager to explore the latest advances with 2,100 of the containers fitted with controlled atmosphere technology.

The shipping industry is expressing an increasing concern over insufficient reefer box capacity in the market following several years of underinvestment in the sector, noted Von Stempel.

The Cool Logistics Asia forum is hosted alongside two other show-floor forums, namely, the Asiafruit Business Forum, and Smart Horticulture Asia. The Hall Forums form part of a bustling trade show at Asia Fruit Logistica, which is held at AsiaWorld- Expo in Hong Kong on 5-7 September.