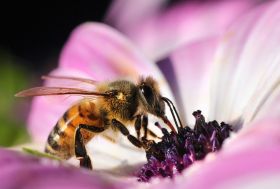 Glyphosate could be killing honeybees by damaging the beneficial bacteria in their guts and making them more susceptible to infections, new research has found.

Past studies have shown that neonicotinoids have a negative impact on reproduction in honeybees, however now it seems that glyphosate may also be contributing to the sharp decline in the vital pollinators' numbers.

Until recently, the active ingredient in the world’s most widely used weed killer, Roundup, has not been thought to harm animals since it targets an enzyme only found in plants and bacteria. However, scientists at the University of Texas have evidence suggesting that in some bees the chemical damages gut bacteria that helps them grow and defend against pathogens.

Earlier this year a 13-week pilot study by the Ramazzini Institute in Italy also found that when rat pups were exposed to Roundup at levels considered safe for humans, it disrupted their beneficial gut bacteria, genes and sexual development.

“Exposing bees to glyphosate alters the bee gut community and increases susceptibility to infection by opportunistic pathogens,” wrote Erick Motta and his fellow researchers in their new paper.

“We demonstrated that the relative and absolute abundances of dominant gut microbiota species are decreased in bees exposed to glyphosate at concentrations documented in the environment,” they added.

The scientists exposed honeybees to the controversial chemical at levels seen in crop fields, gardens and on road sides. Young worker bees were found to die more often when exposed to a harmful bacteria know as Serratia marcescens if they had first been exposed to glyphosate.

A spokesman for Monsanto said: “Claims that glyphosate has a negative impact on honey bees are simply not true. No large-scale study has found any link between glyphosate and the decline of the honeybee population.

“More than 40 years of robust, independent scientific evidence shows that it poses no unreasonable risk for humans, animal, and the environment generally.”

However, farming charity and organic certification body, the Soil Association, insisted that the research was “extremely worrying”. Head of policy, Emma Hockridge, speculated that the findings may be “the tip of an iceberg of what we are still to find out, as we have seen with the far more studied neonicotinoids”.

“Alongside a stronger and more transparent system of pesticide regulation, we need a wholescale rethink of our farming systems so that nature friendly farming methods, such as organic, become the norm – but this won’t happen without strong government support.”

In November 2017 the EU voted to renew the licence for glyphosate, ending months of deadlock related to concerns over the chemical’s safety and environmental impact. The chemical was reauthorised for five years after a proposal in the EU Commission’s Appeal Committee was passed by 18 votes to nine.

The UK, Spain, the Netherlands and Poland were among the countries that voted in favour of the chemical’s reauthorisation, while Germany, France and Italy all voted against. Portugal was the only country to abstain.