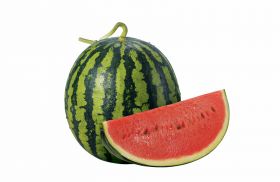 Adding to the premium domestic offering , high-sugar watermelons from across Korea’s production regions will be labelled with stickers allowing Emart consumers to access place of origin information for the first time this season. Users will be able to scan a barcode and see traceability and origin details for their premium watermelons.

So far, Emart said it has flown around 140,000 tonnes of watermelons (both premium and standard) from major domestic production sites.

The retailer says watermelon sales have been on an upward trend since spring, with sales in the period from 25 March to 24 April for premium watermelon 163 per cent higher than the same time last year, and sales of the standard-grade fruit 20 per cent higher.

Domestic fruit in Korea has seen strong sales growth across Emart stores overall, with its popularity overshadowing imported fruit even further in this month-long period.

Emart said its popularity of Korean spring watermelon has spurred the shift in preference for domestic produce. Imported Zespri kiwifruit from New Zealand has also seen a 25 per cent reduction in price compared with this time last year.