An international study has identified a sex determining gene in kiwifruit, which could pave the way for new cultivars 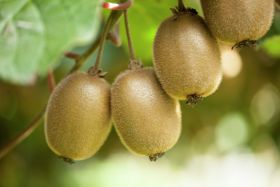 A research team comprised of scientists from around the world has discovered a sex determining gene in kiwifruit that could potentially lead to the breeding of hermaphrodite varieties.

New Zealand-based Plant & Food Research scientists and their research partners in Japan and the US identified a gene called Friendly Boy (FrBy), which is necessary for pollen production and is found naturally in Y chromosomes of male kiwifruit plants.

It is the second sex-determinant discovered in kiwifruit after Shy Girl (SyGI), which suppresses fruit production in male kiwifruit plants.

“We found that expression of FrBy in female kiwifruit resulted in hermaphrodite plants, which means the female plants could both produce and receive pollen, making them capable of self-fertilisation.”

The results of this study pave the way for the potential development of hermaphrodite kiwifruit.

The study has also validated the “two-mutation model” in sex acquisition of plants proposed Deborah and Brian Charlesworth in 1978.