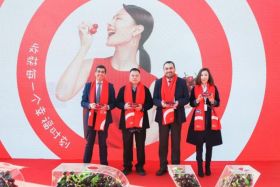 Representatives of the Chilean government and Asoex joined Chinese fruit importers and distributors in Jiangnonghui wholesale market in Guangzhou last weekend to mark the beginning of the 2019/20 Chilean cherry export campaign in China.

The market, formerly known as Guangzhou Jiangnan Fruit Wholesale Market, is the first stop in mainland China for much of the Chilean fruit shipped by sea and is a key distribution point for the rest of China.

The event coincided with the arrival in Jiangnonghui of the first shipment of fresh Chilean cherries. “Chile's cherries have finally arrived!” said Asoex marketing director for Europe and Asia, Charif Christian Carvajal.

“Once again, we are promoting our cherries under the slogan ‘Enjoy your Red Moment’. And the good news is that this season, more people will never be able to enjoy our cherries, since we estimate a record export volume of 210,000 tonnes to the world, a figure much higher than the nearly 180,000 tonnes shipped last season.

“But in addition to the volume, this season our cherries enjoy great quality and condition upon arrival in China.”

Although airflown cherries have been available in China since mid-October, the arrival of cherries by sea marks the beginning of a period of increased supply for Chinese consumers, which will be extended beyond the celebrations of the Chinese New Year or Spring Festival.

Exporters said Chilean cherries would be available throughout China until the end of February and beyond.

One hundred containers of Chilean cherries will arrive in China this season, with maximum volumes expected in January and February, especially for the Spring Festival.

A large part of this volume will arrive by fast boats or “Cherry Express”, which in about 20 days deliver the fruit directly from the port of Valparaíso to Hong Kong.

“Trade between Chile and China has expanded greatly since the Free Trade Agreement between the two countries entered into force in 2006,” said Zheng Nanshen, general manager and CEO of Guangzhou Jiangnonghui Market.