Asiafruit Congress brought together some of the leading voices in Asia’s banana trade to discuss the sector’s journey through Covid-19 and what the future holds. 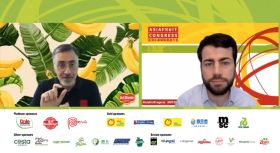 On 28-29 September, some of the key players from across Asia joined Asiafruit Congress to paint a picture of this evolving landscape and highlight the opportunities for the fruit.

Mohammed Abbas, Del Monte Fresh Produce’s senior vice president of Asia Pacific, Middle East and North Africa, opened the discussion with an examination of the effects the Covid-19 pandemic has had on the banana trade in Asia. The shipping and logistics challenges impacting not only Asia but the whole world have had significant influence.

“You have a lot of examples where you missed a transshipment or had a delayed arrival and you missed on sales for a week,” said Abbas. “Then the following week, you have two loads arriving at the same time with increased volumes, arriving into a market at the same time. This all had pressure on prices naturally.”

Abbas said this challenge was compounded by a consumer preference for produce with a long shelf-life in Asia. Combined, these factors resulted in excess volumes and depressed prices across the region.

Suppliers in South-East Asia have benefited from the situation. Abbas noted production in the likes of Vietnam, Laos and Cambodia has been increasing for some time and Covid-19 provided the perfect opportunity.

“Because of the proximity of Vietnam, Laos, and Cambodia to China, the Chinese demand shifted from the Philippines towards these new origins because of proximity, logistics and ease of market access China,” said Abbas.

He expected this trend to continue for the next few years until shipping disruption dissipated, then the Philippines would regain its position in the market due to its consistent and cheaper supply. The story is similar for Central America.

“I think once the pandemic is over, and the shipping operations are back to normal, and we get consistent shipping transit times, Central America will play a major role in Asia,” said Abbas.

The pandemic has also affected one of the fruit’s key selling points as an on-the-go snacking option, according to Abbas. With consumers staying at home and buying more indulgent foods, bananas have less room to innovate compared to other fruits.

“Serving the consumer with bananas in different ways, different shapes, different forms can only happen in processing,” said Abbas. “Moving into fresh cut, I think bananas can have an opportunity there.”

Providing an insight into China’s banana market was Goodfarmer’s Eric Zheng, who detailed the recent fluctuations in market share.

Zheng said Chinese companies had invested in production in South-East Asia and the subsequent production boom in Laos, Myanmar, Vietnam and Cambodia has seen the combined market share of the four countries in China grow to 35 per cent.

Echoing the thoughts of Abbas, Zheng said in the Philippines smaller plantations had struggled with the challenges of Covid-19 and Panama Disease Tropical Race 4 (TR4), but it could bounce back as a supplier.

“If they (the Philippines) want to recover, I think they need to merge and integrate the small plantations and then invest more on controlling TR4 so that their product and quality can be recovered,” said Zheng.

“Regarding Ecuador, although its percentage of market share is lower than before, its volume is still going up every year, it’s just South-East Asia’s volume has also increased.”

When it comes to consumer trends, Zheng said increasing importance was being placed on quality, which also saw the premium end of the market growing.

“Before there were more requirements placed on the external quality of bananas in China because of cosmetic appearance, but in recent years internal quality has become just as important,” said Zheng.

“The demand for single finger is increasing and at the same time the demand for high-end bananas is also going up in China.”

Asiafruit Congress finished its examination of the banana trade with a look at India and its rapid export development.

From 2015 to 2019, India’s banana exports doubled to 174,000 tonnes and Pankaj Khandelwal, co-founder and chair of Indian exporter INII Farms provided some context to this growth.

Khandelwal said producers and buyers looking to diversify, the investment of large corporates in smallholder farms and the massive transformation of infrastructure in India all helped drive the development of the Indian banana industry.

The Middle East has been the main market facilitating this growth but Khandelwal said India needed continuous improvement if more growth was on the cards.

“The Middle East, because of logistics and trade relationships, was the starting point for India. It will continue to be a very important and a large market for Indian bananas,” said Khandelwal.

“However, India needs to up the game as far as quality is concerned. So far, it has largely had a price advantage. Going forward as India becomes more mature as a supplier of this particular product, quality will start to play a significant role.”

Khandelwal said Europe and Asia would be the next big markets for India but there was still work to be done.

“To ensure the shelf life is there for the longer distance travel time requires a whole lot of work. The price advantages and the story of Indian bananas remains very strong and I strongly believe these markets will accept it,” said Khandelwal.

“On the production side, India needs to now go to the next level to be able to tap these markets.”