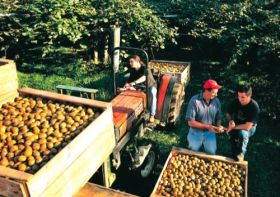 Kiwifruit Vine Health (KVH), the independent body leading the New Zealand kiwifruit industry's response to the outbreak of Psa-V in the country, has released a report delving into the impact of the vine-killing disease and its potential future cost to the market.

It is estimated that the disease could result in the loss of up to 470 jobs every year up to 2015, impacting on households that rely on the kiwifruit sector for income, while the study ominously forecast that the industry and the wider Bay of Plenty 'has yet to experience the full impact' of the disease.

According to Burke, the report considered two recovery strategies for the industry – one unassisted, one assisted by industry stakeholders – to help understand how those growers hit by the disease can be supported, and how the industry as a whole can return to long-term growth.

"It is clear from the report that the bright future the kiwifruit industry had prior to Psa-V being confirmed in New Zealand remains, once it recovers from Psa," Burke explained. "To ensure this happens will require the tremendous level of cooperation, both from within the industry and between the industry stakeholders, such as central and local government and banks, continues in the future."

New Zealand Kiwifruit Growers Incorporated president Neil Trebilco welcomed the report, and the fact that the figures allowed the cost of Psa-V to be quantified to a certain degree.

"The exact coast of Psa-V will unfold over the next few years," he noted. "While the immediate priority is helping those growers worst affected by Psa, the reality is there will need to be a long-term commitment to the industry to help it rebound from Psa's significant setback.

"To date, all groups we have worked with have understood the significance of the disease and were supportive of the industry as it first responded to the disease and now looks to recover from it," he added. "I'd like to thank all those stakeholders for their support and look forward to working with them in the future to return New Zealand's flagship horticultural industry to its long-term growth potential."