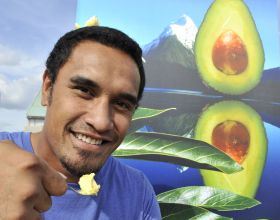 "This was a wonderful celebration of New Zealand avocados and New Zealand. Fifty-eight Japanese media attended, and they were all very excited to learn more about our fruit – many were already big fans. The food at the event displayed the versatility of avocados and the media loved it,” she said.

"Having ex-All Black Jerome Kaino’s support also lifted the occasion. It was superb to have his super stardom backing and support for the industry at this key launch. Japan's Miss World also attended, proclaiming her love of avocados. The local media also commented that New Zealand avocados look the most attractive in their stores, which was great to hear.

New Zealand growers expect to export some 320,000 trays of avocados to the lucrative Japanese market this summer, tapping into an ever-increasing demand for the fruit in Asia.

Although volumes to Japan will be down slightly on last year’s bumper export crop of 372,500 trays, the fruit is expected to fetch a premium. This year’s effort is still well up on 99,436 trays supplied during the 2010-2011 season.

“The outlook for the Japanese market remains very positive and our efforts last year to raise the profile of our industry there are clearly paying off, said Scoular. “The opportunity for New Zealand to supply highly nutritious, responsibly grown avocados to meet the demands of the increasingly wealthy and health conscious South East Asian market is excellent.

“Much work has been done over recent years to educate and inform the Japanese importers, consumers and media of our avocados and their health and nutritional benefits. This is a hugely valuable market for us,” said Scoular.

According to a media release from the NZAGA, Kaino enjoyed the event, and said it was great to be involved in promoting New Zealand avocados in Tokyo. “The atmosphere was awesome. It made me very proud of New Zealand."

Kaino, who now plays for Japan’s Toyota Verblitz team, epitomised the event’s theme – “The Best of New Zealand in Japan” – telling media of his liking for avocado and Marmite on toast.

Focus on the Japanese market has intensified following successes last year and greater emphasis on developing new markets for the fruit, most specifically in South East Asia.

The three New Zealand exporters AVANZA, NZAVO and Seeka have made their mark in Japan over recent years.
They are a consolidation of the eight that were active in Japan last season as the NZ industry presents a more united approach to overseas marketing.

Representatives from Olivado, The Grove and Fressure Foods were also in attendance.

This year also signalled a turning point for the avocado industry in New Zealand, the media release stated. For the first time, a five-year plan has been implemented, focused on strengthening and growing value through an expanding export market. Grower support of the plan was shown through the recent Commodity Levy Referendum that resulted in majority support from voters for the funding structure of the organisation for the next six years.

As avocados become an increasingly important export commodity for New Zealand, Scoular said a holistic approach is now critical to its future progress and consolidation.

“Our focus is on bringing the industry together, uniting all fronts so that we can be stronger together. We have some exciting plans and strategies to this effect that will be rolled out over the coming years and this really marks the start of those plans,” explained Scoular.