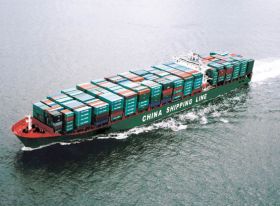 China’s COSCO Container Lines and China Shipping Container Lines Co (CSCL), both among the world’s top 10 lines, have confirmed the cessation of their business with Iran.

The move comes despite China’s traditional stance as a primary ally of Iran, which an industry source said reflects the increasingly globalised nature of the trade China’s shipping firms now operate in. “They are more risk averse to Iran now," the source told Reuters.

Iran has traditionally been heavily reliant on shipping routes for its trade of food and other consumer goods. However, the country is being increasingly forced to rely on overland routes.

“The vast majority of major container carriers have now ceased calling at Iran,” shipping analyst with Business Monitor International Daniel Richards told Reuters. “As even feeder services begin to shy away from calling there, the country will struggle to continue importing.”

Other shipping lines that have confirmed their departure from Iranian waters included Taiwanese companies Evergreen and Yang Ming Marine.