UK-based retailer Tesco is weighing up its options after announcing a profit down turn and a £263m (US$432.5m) accounting black hole 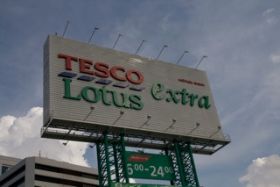 Tesco is considering a spin-off of its Asian operations as a means of raising capital to pay off debts and appease ratings agencies and investors.

Eight senior staff members have been suspended after a whistleblower unveiled a £263m (US$432.5m) black hole in Tesco’s accounting books, with news announced yesterday that the UK-based retailer posted a 92 per cent fall in pre-tax profit in the first six months of 2014.

Newly appointed chief executive Dave Lewis and his acquisitions team have drawn up a list of measures that could potentially raise the much needed money, according to Reuters.

Possible options include listings its Asian operations separately on the stock market, worth an estimated £8bn to £10bn; spinning off its lucrative Asian operations in Thailand, South Korea and Malaysia; or floating its Clubcard loyalty programme.

As for turning to investors for cash, Lewis said while Tesco was putting all options on the table, he believed the costs could be recuperated through selling its assets and increasing savings.

"Our business is operating in challenging times," Lewis told Reuters, adding he could not put a monetary figure on the cost of rebuilding Tesco. "Trading conditions are tough and our underlying profitability is under pressure.

"The UK, the balance sheet, trust and transparency, and the brand of the business will be the priorities for now."

Moody’s has warned it may downgrade Tesco further, already listing it two notches above a ‘junk’ rating, with Tesco’s shares falling 8.5 per cent to an 11-year low.

Tesco operates 1,700 stores in Thailand under its Tesco Lotus brand, the country’s largest retailer, and operates 400 stores in South Korea under the Homeplus brand.