Cherries pick of the bunch for CNY 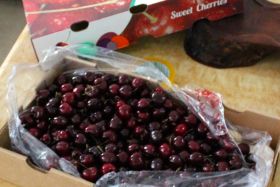 Cherries have already begun arriving in China from Chile and Australia, with the first chartered China Eastern flight of Chilean cherries touching down in Shanghai on 26 November.

In early November, cherry prices were getting as high as RMB1,000 per carton before going down to RMB500 in late November, explained Jenny Fang, vice manager of Shanghai Oheng Import & Export, which owns 20 per cent of Shanghai’s Huizhan wholesale fruit and vegetable market. Closer to Chinese New Year on 19 February, expectations are that the prices will rise back up as demand peaks for the fruit during the gifting period.

Before damaging rains hit some of Chile’s production regions in early December, the Latin American exporting country was reportedly looking at a bumper cherry crop of an estimated 21-22m cartons, with China expected to absorb some 13-15m cartons over the season.

Chile could now be looking at a 15 per cent loss in cherry crops, according to Chile’s producer association Fedefruta.

Speaking to Asiafruit before the rains hit Chile, Golden Wing Mau’s outgoing general manager of imports Rod Hill was predicting an increase of 25-40 per cent in arrivals compared to last season.

“China can absorb that volume though. It would be more about logistics than about sales,” said Hill.

While prices fluctuate, the market in China is still well able to absorb growing volumes of imported cherries, said Hill, with some of the biggest challenges being not only the logistics but also selling strategically in order to sustain volumes until 19 February.

Alan Wu from import company Bo Tao Fruits told Asiafruit that the number one import into his Huizhan market-based business will be cherries from Chile, with the market to be running 24-hours per day throughout January and early February as increased volumes pass through before the Chinese New Year.

“It will be a challenge as there’s a huge volume of fruit available,” explains Golden Wing Mau’s Hill. With cherry imports rising from 6-7m cartons a few years ago to 10m cartons, and now a potential 14m on the cards for 2014, Hill says longer term that could rocket to 25m cartons if production ramps up enough.

Australian cherries, on the other hand, can’t compete with the volumes of Chilean cherries coming in to the market. But while a small volume will come from both New Zealand and Australia, they command a high enough price and are of high enough quality to sit nicely at the premium end of the fruit market.

“The volume from Australia and New Zealand will be much lower, but the market in China will be full of cherries from Chile. At Fruitday we want to always provide the best for our customers, so we think that New Zealand and Australian cherries will play an important role further on in the season as they come in a bit later than Chile.”