China's fresh fruit imports have increased 23 per cent to 3.3m tonnes in 2014 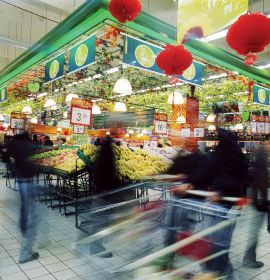 China’s direct fresh fruit imports increased 22.8 per cent to 3.3m tonnes in 2014 compared to the previous year, according to figures released by China Customs.

Leading the imports were bananas, with imports increasing 119 per cent to more than 1.1m tonnes. The Philippines was the major supplier of bananas to China, with Ecuador increasing its imports 10-fold to more than 200,000 tonnes.

Exotics from neighbouring South East Asian nations also played a role in the increased fresh fruit imports. Dragonfruit was the second-most imported fruit after bananas, with a 12 per cent growth in imports to 603,000 tonnes, mostly from Vietnam, followed by longans and durian, predominately from Thailand. These four fruits accounted for 71 per cent of China's total fresh fruit imports.

Temperate fruits, which have a strong demand from Southern Hemisphere suppliers due to the counter seasonal capabilities, comprised 17 per cent of the total fresh fruit imports. Fresh grapes was the leading temperate fruit, supplied mostly from Chile and also from the US and Peru, lifted 13 per cent to 211,000 tonnes. Oranges saw 90,000 tonnes imported in 2014, up just 3 per cent on 2013, mostly imported from South Africa and Australia while the Californian oranges remained locked out of the country.

Cherry imports increased 11 per cent to 64,00 tonnes, though the figure could have been higher had it not been for weather conditions hampering supply from Chile and the US, accounting for 80 per cent and 15 per cent of China's cherry imports respectively. The remaining 5 per cent of cherries was supplied by Canada, Australia and New Zealand.

Kiwifruit imports increased 30 per cent to 62,000 tonnes, mostly from New Zealand, with almost 25 per cent of kiwifruit imported from Europe, particularly from Italy, which supplied 11,000 tonnes (175 per cent more than in 2013).

Apple imports to the People's Republic didn't fair so well, with a 27 per cent decline to 28,000 tonnes, with the majority of apples imported from Chile. Apple trade was also impacted by the blocking of trade from the US, which has since been resolved. Interestingly, France supplied 3,500 tonnes of apples to China, which was a lift of 175 per cent.