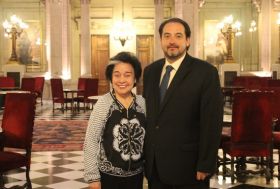 Chile has announced its intention to secure a Free Trade Agreement with the Philippines. Following a recent meeting between Andrés Rebolledo of export promotion bureau Direcon and Consuelo Puyat-Reyes, the Filipino ambassador in Chile, it was agreed that a Joint Study Group will be officially launched at the Asia-Pacific Economic Cooperation Organisation (APEC) summit which takes place in November in Manila to discuss the creation of a bilateral trade agreement between the two countries.

“Having already negotiated similar deals with Brunei, Singapore, Malaysia, Vietnam and Thailand, the Philippines is a natural progression in our strategy to strengthen Chilean ties with ASEAN countries,” Rebolledo said. “With a population of 96m, the Philippines could be an interesting market for our country and help us to reinforce our presence in the Asia-Pacific region.”