Australia has little to gain from TPP 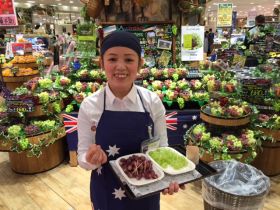 Australian grape exports to Japan could be one of the few to gain from the TPP deal, if there are further tariff cuts

Australian horticulture has enjoyed some strong wins in recent bilateral free trade agreements (FTAs) to the extent that there is little more upside now that can come from the Trans Pacific Partnership (TPP).

Horticulture – which includes fresh fruit and vegetables, nuts and nursery products and cut flowers – is reporting record trade figures with A$1.55bn exported in 2014/15. Imports were valued at A$1.35bn with two-way trade valued at A$2.9 billion, 13 per cent higher than the previous year.

Countries involved in the TPP accounted for 26 per cent of Australia’s export trade in 2014/15 and a much larger 54 per cent of the import trade. This is due to the US and New Zealand being the largest suppliers of imported counter-seasonal fresh fruit to Australia, and to Vietnam being the largest supplier of cashew nuts. In addition, Australia’s largest export markets, which include Hong Kong, China, India, Middle East and Europe, are outside the TPP.

Although the details of the TPP agreement have not been released it is hard to see where there are real potential upsides as tariffs are already at, or close to, zero for existing Free Trade Agreements with TPP players and quota restrictions are also minimal.

Australia’s horticulture trade with Japan should have more to gain than any other market in the TPP if the deal can deliver further benefits than the recent JAEPA, which was signed into force earlier this year. This is particularly the case for table grapes and citrus, which currently face import tariffs exceeding 15 per cent that are being reduced over then next 10-15 years. Indeed a better outcome than this would be a win for the fruit industry.

The US is horticulture’s largest trade partner in the TPP with trade heavily skewed towards imports, mainly citrus, grapes and cherries. Tariffs are already zero under the AUSFTA, which took effect in 2004. Prohibitive quarantine access and/or competitive pressures restrict Australian horticulture exports to the US. Similarly, horticulture trade with New Zealand has been tariff-free since 1983 and is dominated by avocado and kiwifruit imports while Australia sends a small range of fruit and vegetables that are largely steady trade given the small size of the New Zealand market.

Tariffs on trade to Vietnam are either at, or close to, zero under the ASEAN-Australia-New Zealand Free Trade Agreement (AANZFTA). While cashew nuts dominate the import trade, fresh fruit exports had been growing strongly as tariffs decreased until trade was disrupted due to quarantine access technicalities that are currently being resolved. Singapore and Malaysia are both largely tariff-free, which is not going to give any economic advantage over China and other Asian markets regardless of whether they are in the TPP.

Australia does not export fresh produce to Latin America, while imports of asparagus, mangoes and onions from that region are small in volume and enter Australia tariff-free. Again there is no perceived benefit. The tyranny of distance is a major inhibitor of trade for perishable horticulture that will never be resolved by a free trade agreement when there are sources of supply within much closer reach.

Trade will go on and perhaps while some easing of red tape in the detail may improve the trade flows, horticulture already enjoys low of no tariffs within the TPP partners. Only a major shift in the quarantine access conditions for the US, New Zealand and Japan could be a real game-changer and these negotiations are not embedded in trade agreements.