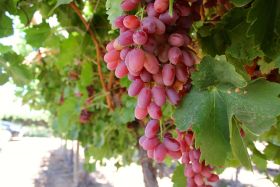 The 2015/16 Australian table grape season has kicked plenty of goals, starting with a record shipment of 108,584 tonnes as of May, up 32 per cent compared to the previous season.

Significant growth was seen in shipments to Asia and the Middle East, and a new record was set in April 2016 for the highest volume of grapes shipped in any month at 32,587 tonnes.

China remains the leading export destination, followed by Indonesia and Hong Kong, though Japan has been the rising star of the season, with shipments growing three-fold since the 2014/15 season to May, reaching nearly 10,000 tonnes.

Shipments to China are up five times that of last season, due mainly to the increase in direct shipments to the People’s Republic, rather than through the grey channel via Hong Kong. As a result, shipments to Hong Kong were down 57 per cent.

Combined shipments to Hong Kong and China during the 2015/16 season to May reached 42,000 tonnes.

While the final export figures for the season are still being collated, the data provided by the World Trade Atlas and analysed by Fresh Intelligence represents 98 per cent of the Australian table grape export season.

“Japan and South Korea in particular are crucial markets to export growth for table grapes,” Scott said. “Both countries are niche markets, seeking only the highest quality product from Australian grower. It is critical that the industry supplies mature, sweet, clean, green fruit.”

Product differentiation has been key to building demand for Australia table grapes over Southern Hemisphere competitors, explained Scott, with Chile, South Africa and Peru having the advantage of access to cheaper labour and lower input costs.

“In order to command a premium price over the significant volumes being produced by Chile, the Australian grower must supply fruit with high sugar content, crisp berries and consistent bunch colour,” Scott said.