They describe themselves as the matchmakers of fresh produce – but what does this latest wave of fruit and veg e-commerce platforms offer suppliers? 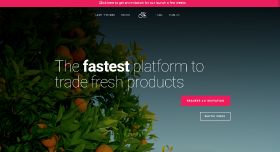 Sites such as Fruitspot offer online trading for fresh produce

Trading fresh produce online is nothing new. The first e-commerce sites targeting the commercial fruit and vegetable sector started appearing in the 90s, but an immature internet and low investment into technology stunted any potential growth. But now, driven by ever-more sophisticated technology, and the exponential interest in online from China and Asia more widely, there are some new kids on the block, and they’re determined to succeed.

The founder of new e-commerce site Fruitspot, Jose Baptista, believes the fresh produce industry will one day choose to trade online as the preferred option. “This industry needs e-commerce to happen,” he says. “There are big problems to solve – we need to reduce food waste and we need to create more transparency in the market. If you’re a grower and have extra produce, you can go online, enter a form for what you have and you’ll receive an alert for anything that matches it.”

Fruitspot, due to launch in the next few weeks, has been in development for around a year and like other online trading platforms it offers a matchmaking service for produce buyers and sellers to trade across the globe. Baptista has also specifically chosen to enter the market by promoting its ability to deal with gluts or shortages. “In the last five years, others have tried to start similar businesses with varying degrees of success. If it’s an add-on to their full-time produce business, success is hard,” he explains. “Sometimes they have very good contacts in the industry, but running an e-commerce site is not a produce business – it’s a technology business. On things like ease of use and design, produce e-commerce has been poor. Investment has either been minimal or excessive.”

With a background in business strategy and user experience, Baptista says he has built a database of 45,000 contacts. The company also has the president of US supplier Brothers Produce, Brent Erenwert, on board as director of innovation. Presenting e-commerce as an option remains the biggest challenge, says Baptista, and it’s fair to say that while Asia may be leaps ahead in online trading for B2B, the concept is still largely alien in Europe.

Aside from promotion and education, Baptista is convinced the skills behind an e-commerce site for produce are vital – and in this he is joined by fellow e-commerce site founder, Anil Chopra, of Indian company Vegfru.

“The fresh produce sector has remained underserved by technology because of the trade complexity – a long chain of intermediaries; perishability; opacity, price volatility; lack of standardisation; easy capital availability etc,” says Chopra. “But more so because of the low availability of people who understand both fresh produce trade and modern technology platforms.”

Chopra sees his site, which has been in operation for a year and is “extremely successful” according to Baptista, as a “virtual marketplace where the small traders at the bottom of the pyramid can freely trade their products using appropriate modern technology irrespective of geographic, cultural, regulatory, or logistical boundaries.” Vegfru is essentially a matchmaker, he says, and works by charging access fees to use the platform, in addition to fees for successful transactions.

Speaking about Vegfru, Baptista says: “They are making hundreds of transactions a month, which is pretty successful in a short space of time. If it works in India then it should work in Europe and the US.”

As tech giants such as Amazon, Google and Alibaba continue to revolutionise the wider retail landscape, for once it seems as though fresh produce is being offered the chance to keep up with the crowd – it remains to be seen if the concept will take off.