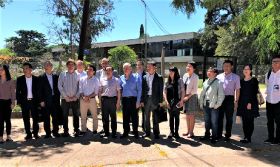 Argentina moved a step closer to securing access to China’s burgeoning blueberry market following the conclusion this week of a visit by Chinese inspectors to assess the methyl bromide fumigation process that will pave the way for air shipments of this fruit.

Federico Bayá, president of the Argentinean Blueberry Committee (ABC), welcomed the visit as “very positive” and said he hoped to have the protocol finalised by next year.

ABC said that the technical delegation visited the Obispo Colombres Agro-industrial Experimental Station in the province of Tucuman.

The Argentine government confirmed that a public officer would travel to China to sign the protocol, thereby concluding the application process.

The ABC’s vice president Alejandro Pannunzio also held meetings with China’s vice minister of agriculture, Qu Dongyu, this week under the auspices of the WTO’s Ministerial Conference in Buenos Aires, to discuss the creation of guidelines for closer collaboration in food matters.

“China is the great market of the future and we can supplement its own production with quality fruit at a competitive price,” concluded Bayá.