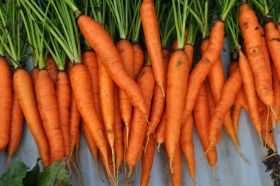 Australian researchers believe a peeled carrot and a dose of cartoons could be the keys to boosting vegetable consumption among children.

A study carried out by Deakin University’s Centre for Advanced Sensory Science found children consumed two servings of vegetables when given a box of whole carrots while watching a 90-minute film.

Lead researcher Dr Gie Liem said the study was critical in showing the importance of providing vegetables to children as snacking options at all times of day.

“We know that less than 10 per cent of Aussie kids get the recommended five servings of vegetables they need each day, so it’s essential we find practical ways to encourage children to eat more vegies,” Liem said.

“Part of that is the way children are offered vegetables, and how often that happens throughout the day.”

Sixty primary school-aged children took part in the study, with two separate film visits. On the first visit half the children were given diced carrots to eat, the other were given whole carrots. On the second visit they swapped.

“We found that the average child ate double the amount of whole carrot compared with diced carrot, and when they ate the whole carrots it equated to an average of about two servings of vegetables,” Liem explained.

Liem pointed to several reasons why more of the whole carrots were consumed on average than the diced.

“One factor is that we typically think any serving we’re given is the normal serving size, so we’re likely to finish it. When you have a whole carrot in your hand you’re likely to consume whatever is in your hand,” he said.

“We also found that children consumed the whole carrots faster, they took bigger and quicker bites, and when you consume something faster you consume more.

“It’s also interesting to note that when children were asked to rate their ‘liking’ towards carrots before and during the study, it stayed at a fairly neutral level. So these were not kids who necessarily loved carrots, yet we heard no complaints throughout the films, they were just nibbling along, not really paying attention to what they were eating.”